Amid predictions that this year’s flu vaccine will offer limited protection, medical researchers are renewing their focus on a universal flu vaccine.

A universal flu vaccine would offer more broad protection than today’s vaccines, which must be targeted at viral strains deemed dangerous many months before flu season begins.

The problem is that the flu virus can change fast enough to evade those vaccines.

No versatile influenza vaccine is on the market, but one of the most promising is being developed by FluGen, a spinoff from the University of Wisconsin–Madison. The Madison startup has announced a plan to evaluate its innovative influenza vaccine in a trial of 100 people later this spring. 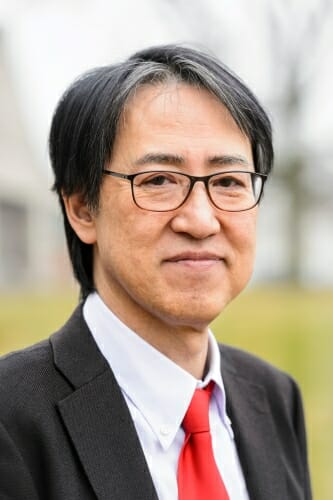 For almost a decade, the company has been exploring a genetically altered virus that can reproduce only once in the human body. “Our vaccine contains a live virus that infects you but cannot make you sick,” says CEO Paul Radspinner.

Viruses reproduce by hijacking cellular machinery. The essential technology for Flugen’s project deletes a gene the virus needs to reproduce more than once. The discovery was made in 2002 by company co-founders Yoshihiro Kawaoka, an internationally known influenza researcher at the School of Veterinary Medicine, and his colleague Gabrielle Neumann.

The principle that an infection can be powerful medicine, however, is much older, Radspinner says. “Our vaccine is based on the concept that if you get the flu this year, the odds that you will get it next year go down dramatically.”

Beyond creating a real but extremely limited infection, FluGen’s invention also uses a promising delivery route. Instead of being injected into the muscle, it will be squirted into the nose, which is far more faithful to a natural infection. “If you think how you get the flu. It’s usually through the nasal passages or the throat,” Radspinner says.

Intranasal delivery triggers immunity in the mucus been shown to “activates multiple immune systems in the body, while the traditional shot in the arm affects primarily the antibody-based immune system.”

Influenza is a global disease caused by a group of viruses that change rapidly and spread easily through coughs and sneezes. Worldwide, the disease kills between 250,000 and 500,000 per year. Due to the long lead time needed to produce vaccine in eggs, public-health authorities must choose vaccine for the northern hemisphere in February.

During the nine or more months before flu season begins, the virus undergoes “genetic drift” as it evolves and reasserts its genetics. Such drift is a major reason why, even in healthy adults, influenza vaccines are only 10 to 60 percent protective.

FluGen’s vaccine is made in mammalian cells, not eggs, so faster production should allow less time for genetic drift. Unlike the current vaccine, the virus is alive, and therefore more likely to trigger immunity. Already, FluGen has shown that the vaccine triggers a much broader immune response, affecting not just the mucus tissues but also B-cells, T-cells and antibodies.

“Our goal is to trick the body into thinking that it’s infected, so you get protected, without getting the symptoms that are the historic price of protection.”

FluGen’s technology is protected by multiple patents held by both the Wisconsin Alumni Research Foundation and FluGen.

A test in healthy adults, completed in 2016, showed no warning flags related to safety, “and it told us we are hitting many sections of the immune system,” Radspinner says.

Those results helped to justify a $14.4 million grant awarded by the Department of Defense to test whether a vaccine based on a 2009 strain of flu can protect against the strains that circulated in 2014-15. “We’re aiming to prove effectiveness after six years of genetic drift,” says Radspinner. “That’s a big mismatch.”

Half of the 100-odd volunteers in the upcoming study will get a saline squirt in the nose; the others will get FluGen’s vaccine. Later, everyone will get a nasal dose of live flu virus. “They’ll be in ‘flu camp’ for 11 days in an isolation facility in Belgium,” Radspinner says. “We will measure how well our vaccine protected against the flu challenge, based on infection and symptoms, and we’ll look at a broad range of safety indicators as well.”

The goal is to have initial results by the end of the year.

Despite the dual benefits from faster vaccine production and broader immunity, regulatory approval is expected to entail safety-efficacy trials involving several thousand people. “With any vaccine, safety is the paramount issue, so the FDA [Food and Drug Administration] wants to see as many subjects as possible,” Radspinner says.

Depending on the scientific results, and regulatory approval, 2025 is a reasonable time for gaining FDA approval and reaching the market, he says.

As FluGen’s dozen employees prepare for the larger trials, the company has begun to use more outside resources, including specialized manufacturers that are not found locally. “We are a semi-virtual company,” says Radspinner.  “We have half of our employees doing basic research and development in the lab, and we coordinate external clinical research and manufacturing through outside organizations.”

Influenza can be extraordinarily dangerous, and flu researchers are haunted by the 1917-18 pandemic, which killed 50 to 100 million people worldwide. Public-health authorities continue to promote the benefits of flu vaccine, but the protection is better in some years than others, Radspinner says. “It may be too early to tell, but the early surveillance, an area where Wisconsin has long been a leader, clearly indicates that this is going to be strong year for flu.”

Even though getting the flu is your best protection against another bout, “Who wants to get sick for a couple of weeks?” he asks. “Our goal is to trick the body into thinking that it’s infected, so you get protected, without getting the symptoms that are the historic price of protection.”