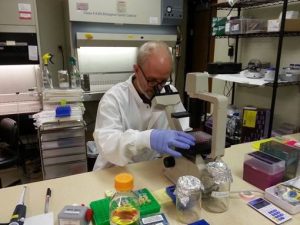 FluGen, a Madison company developing a universal influenza vaccine, is gearing up for a new round of studies on human volunteers this spring, to be held in Europe.

Of 100 people, half will get FluGen’s nasal spray vaccine, RedeeFlu; the other half will get a placebo of saline solution sprayed into the nose. Then all 100 will get a nasal dose of live flu virus.

“They’ll be in ‘flu camp’ for 11 days in an isolation facility in Belgium. We will measure how well our vaccine protected against the flu challenge, based on infection and symptoms, and we’ll look at a broad range of safety indicators, as well,” CEO Paul Radspinner said.

He said an earlier test of 100 people in 2016, to check the vaccine’s safety and find the proper dose, showed no significant adverse impact. “Overall, it was seen to be generally safe and well-tolerated,” he said. Results of the six-month study are being submitted for publication.

Another study, trying the vaccine on adolescents, is scheduled later this year, sponsored by the National Institutes of Health.

RedeeFlu is designed to protect against influenza even as its strains change over time. In the Belgian study, FluGen will use what Radspinner called a “drifted strain.” Patients will receive vaccine with a form of the virus that was used in flu shots in 2008 and will be exposed to the main flu strain from 2014.

“If we are able to get results from a drifted strain … that will be a major breakthrough in flu vaccination,” he said.

A report this week from Georgia State University said researchers there have developed a universal vaccine that protected mice against four strains of flu.

Radspinner said a lot of companies are trying to create a vaccine to cover multiple strains, from multiple years.

“To date, we’ve not seen anything that is in development that has a better profile than our vaccine,” he said. Radspinner said, though, it could be 2025 before RedeeFlu is available to the public, even if all of the tests show it works.

FluGen, 597 Science Drive, was founded in 2007 based on the research of UW-Madison scientists Yoshihiro Kawaoka and Gabriele Neumann. The company has 14 employees, nearly all in Madison, and has raised $27.5 million from investors and $27 million in federal grants.